‘A new battle for civilisation’: Bernard-Henri Lévy’s war on populism (The Irish Times)

The French writer, philosopher, journalist, film-maker, political activist, millionaire and celebrity public intellectual Bernard-Henri Lévy is scheduled to meet me at 6pm in a luxury hotel around the corner from the Élysée Palace. The hostess leads me to the library, furnished with green velvet Napoleonic reproductions. There is a fire in the fireplace. The windows look over a garden courtyard and a piano plays softly in the corner. My telephone pings with a text from Lévy’s assistant. BHL, as he is known, will be half an hour late.

Lévy will perform his one-man play, Looking for Europe, at Trinity College Dublin on May 1st. He first produced the two-hour monologue in Sarajevo, then transposed it to Kiev and London, where it was titled Last Exit Before Brexit.

In March, BHL started what he calls “this mad undertaking” of performing Looking for Europe in 20 cities in the run-up to next month’s European parliamentary elections.

« So what will he tell the Irish? ‘That they are the heroes of Europe, a heroic people in this tempest. They are a people who resist the winds of populism.’ James Joyce was ‘a father of Europe,  like Dante, like Erasmus ».

The first time I heard of BHL, in the early 1980s, he had joined forces with Ahmad Shah Massoud, the ill-fated mujaheddin commander who fought the Soviet occupation of Afghanistan.

Lévy looked rakish in Afghan costume. Back in France, he was as famous for the blindingly white shirts he wore open to the navel as he was for his numerous books. If you added a sword or ruffles, BHL could have been a musketeer or a romantic poet. At the risk of flattering his substantial ego, he invites comparison with Lord Byron or TE Lawrence. He sees himself as the modern incarnation of the great French political philosopher whose US itinerary he traced to write In the Footsteps of Tocqueville.

When BHL finally arrives, I can’t help glancing at the shirt, which is white and open to mid-chest. His wavy hair is grey and thinning, but he exudes energy and self-confidence. “I have a double life,” he says. “I write books and I try to change the world.” 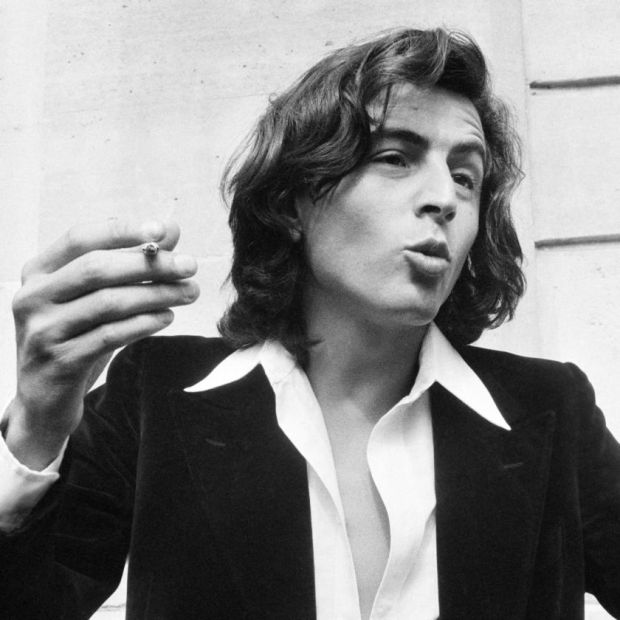 At the age of 70, you are still trying to change the world? I ask him. “Of course. I am not 70. That means nothing,” he says with all the conviction he puts into his political pronouncements. I know what he means. He doesn’t feel 70. That is merely his chronological age.

Lévy’s critics accuse him of holding a Manichean view of the world, and of over-dramatising his causes. He sees the upcoming European elections as nothing less than “a new battle for civilisation”. In Looking for Europe, he claims to dream “that the populists will feel the hiccup of shame, of remorse and melancholy, that they will make hara-kiri …”

The day after the Brexit referendum, Lévy published an article in Le Monde newspaper, where he is a member of the board, denouncing “the victory of xenophobia … of the most rancid sovereignism and the most stupid nationalism. This is the victory of mouldy England over the England that is open to the world.”

Lévy adapts his play for every venue. So what will he tell the Irish? “First of all, that they are blessed, that they are the heros of Europe, truly I think so, a heroic people in this tempest. They are a people who resist the winds of populism,” he replies. James Joyce was “a father of Europe, like Dante, like Erasmus,” Lévy adds.

For days before our interview, I asked friends and colleagues what they thought of BHL. A retired magazine editor told me, “He gives the impression that France is somehow beneath him, that the rest of the world is more important.”

“I am a European of French origin,” Lévy responds. “I have come back to spend a season at home, because my house is on fire.”

Lévy describes the gilets jaunes, the yellow-vested demonstrators who began protests against a carbon tax last November, and whose movement descended into the worst rioting in half a century, as a “fascistic” movement symptomatic of the rise of populism in Europe.

BHL nonetheless expresses sympathy for the gilet jaunes’ original “cry of distress”. He epitomises the privileged elite they so hate, I note. In more than an hour, he refuses to answer only two questions. I ask about his personal fortune, estimated by Wikipedia at €150 million. « No comment. »

BHL says he never minded paying the French wealth tax, which the gilets jaunes demand to see re-established. “I think all demands for new rights and a more fair distribution of wealth are just by definition,” he says.

In Looking for Europe, BHL pleads for a Europe-wide wealth tax, and a Universal Basic Income, which paradoxically was a promise of the populist Italian Five Star Movement he despises. “These two measures can only work on a European level,” Lévy says. A uniform wealth tax would discourage the rich from shopping for tax asylum elsewhere in the EU, and only Europe has the wherewithal to finance the UBI.

THE CASE FOR FOREIGN INTERVENTION

Though he is credited with drawing attention to conflicts which might otherwise go unnoticed, some of BHL’s choices have been severely criticised.  Has he ever, in nearly 50 years, got anything wrong? “No,” Lévy answers emphatically.

Lévy is an ardent proponent of foreign intervention. “To think that a people, a dictator or a group can do whatever they want within a country, that only the laws of their country apply, and that the rest of the world should not get involved, that is called sovereignism. I think it’s a disgrace,” he says.

Critics hold Lévy responsible for the British, French and US intervention that brought down Muammar Gadafy. “I was in Libya in 2011. The regime was preparing a massacre,” he recalls. “I telephoned two people because I know them. I called (then French president) Nicolas Sarkozy and (then US secretary of state) Hillary Clinton, and I saw them both. I did what I could to convince them that they had to intervene.”

Had the West not intervened, Lévy argues, Libya “would be 10 times worse”. Since the allied bombing campaign, there has been “disorder, low intensity civil war, three Isis strongholds eliminated. That is the result,” he says.

« Every day convinces me a little more of the absolute legitimacy of the intervention in Libya. The only thing I regret is that we did not intervene in Syria »

Syria shows what happens when one does not intervene, Lévy continues. “The country is destroyed. It is not disorder but chaos, not a few thousand but hundreds of thousands of dead, two million refugees and the destabilisation of Europe. Every day convinces me a little more of the absolute legitimacy of the intervention in Libya. The only thing I regret is that we did not intervene in Syria.”

At a conference in Tel Aviv in 2010, Lévy said of the IsraelDefence Forces, “I have never seen such a democratic army, which asks itself so many moral questions.”

I saw 105 civilians slaughtered in an Israeli artillery bombardment at Qana, southern Lebanon, in 1996. I reported from Gaza in the immediate aftermath of the 2009 and 2014 Israeli assaults on the enclave, which resulted in more than 3,500 Palestinian deaths.

I tell Lévy his statement is outrageous. He says he knows the Israeli army because he accompanied them in Gaza in 2009. He reiterates the tropes of Hasbara, that Hamas uses civilians as human shields and turns them into kamikazes. He claims there is no confiscation of Palestinian land in the West Bank, only legal sales which Palestinians can contest in court.

Jeff Halper, head of the Israeli Committee Against House Demolitions, refutes Lévy’s assertions. “Since 1967, we have documented the demolition of about 55,000 Palestinian homes by Israel … True, a Palestinian can go to court, but he can never win.”

I shift the conversation to Lévy’s many enemies, who extend beyond French borders. A Belgian comedian called Noel Godin has attacked BHL at least seven times by throwing cream pies in his face. More seriously, Lévy’s name was found on a hit-list kept by Abdelkader Belliraj, a Belgian-Moroccan who was subsequently imprisoned in Morocco. Lévy lives under police protection. His bodyguard waits in the bar while we talk.

BHL seems to relish criticism. There were nine books written against him in just two or three years in the early 2000s, he boasts. He published Who Killed Daniel Pearl? in 2003. It concluded that the US journalist was decapitated as the result of collusion between Pakistan’s Inter-Services Intelligence and al-Qaeda. The book was lambasted by the British writer William Dalrymple. Pearl’s widow, Mariane, said Lévy was “a man whose intelligence is destroyed by his own ego.”

« I am one of the only westerners to get so close to the al-Qaeda beast… To do what I did, you must have a real ego, self esteem, character. You can’t be too afraid »

“I spent a year of my life following her husband’s tracks,” BHL says. “I risked my life for that. I found out why he was kidnapped and assassinated. I am one of the only westerners to get so close to the al-Qaeda beast.… To do what I did, you must have a real ego, self esteem, character. You can’t be too afraid. And you have to want to leave something, a true legacy. All that is called an ego.”

Lévy tells me that his Looking for Europe is “a rare palimpsest”. It reads more like a chaotic mix of name-dropping, incongruous events and nostalgia for past European glory.

Lévy compares having witnessed the fatal stroke that killed the US ambassador to Paris Pamela Harriman in the swimming pool at the Ritz to watching the death of Bosnia. He chats with Henry Kissinger in the men’s room at the Hay Adams Hotel in Washington, and lists female sexual conquests in Milan, Rome, Segovia, Berlin, and Budapest.

Such anecdotes are mixed with diatribes against “this band of braying populists, Italians, Hungarians, Poles and French who occupy, more and more the European political stage.”

Looking for Europe will not stop Brexit. I doubt it will change anyone’s vote in the European elections. It is BHL’s vision of Europe, and a snapshot of what he calls the noxious climate in which the elections will take place. It is also a chance to study at close range one of the last specimens of a dying breed: the politically committed French intellectual.

« Looking for Europe », a dramatic reading by Bernard-Henri Lévy, will take place at Trinity College Dublin on May 1st at 8pm in association with the Trinity Long Room Hub and Quartier Libre & La Règle du Jeu.