NEW YORK — For four decades Bernard-Henri Lévy, the Algerian-born Franco-Jewish author and philosopher, has been one of Europe’s most notable public intellectuals. His writings and appearances sweep across all topics, from history to political action to abstract theories. A handsome silver fox with shirts half-buttoned, he’s the type of figure you’d see in a movie and say “that’s too perfect for real life.”

Of course BHL, as he is affectionately called, has appeared in movies, movies of his own making, but his career as a film director has taken something of a backseat to his political advocacy and speaking engagements. His roots, however, are as a war correspondent, and his four documentaries are dispatches from the front lines of various world conflicts. They are showing as a retrospective in New York (from January 10 – 16 at Quad Cinema) and Los Angeles (January 17 – 18 at the Nuart).

His first work, “Bosna!” (1994), co-directed with Alain Ferrari, goes headfirst into the somewhat forgotten Balkan wars from the first post-Soviet days. Rooted in Sarajevo, BHL experiences the battles and political meetings with a diarist’s eye. “The Oath of Tobruk” (2012), co-directed with Marc Roussel, is a more active film, showing BHL in the lobbying scrum in Europe, America, and the United Nations while dissident forces worked to take down Libyan dictator Muammar Gaddafi.

His two most recent films, which have not yet been seen in the United States, are “Peshmerga” (2016) and “The Battle of Mosul,” (2017) in which BHL is embedded with Kurdish forces battling Islamic State. These two films, along with being incredibly timely, are brutal in their depiction of IS’s cruelty and the Kurds’ resilience. It is not fly-on-the-wall cinema vérité, it is advocacy. 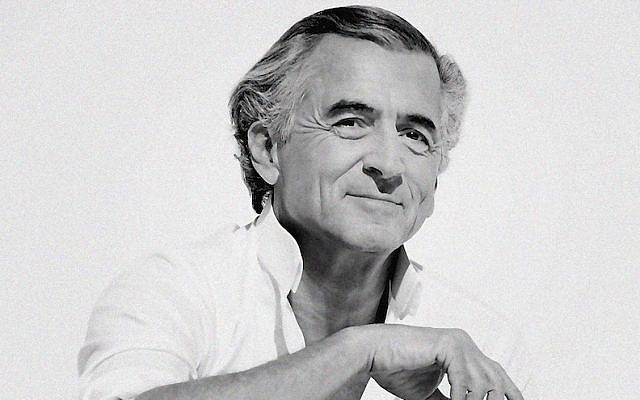 With BHL’s work crossing the Atlantic we had an opportunity to correspond with him about his cinematic output and current affairs in general. Below is an edited version of that conversation.

Times of Israel: Do you consider these films to be informative news dispatches, political advocacy, or artistic statements?

Bernard-Henri Lévy: The three, I hope. But what I am most proud of, it’s perhaps, yes, what you call “informative news dispatches.” For, after everything, no one had filmed this 1,000-kilometer [621-mile] front line between Kurdistan and IS. No one had put together, during the Battle of Mosul, such a group of images and during such a long period.

And, as for my war journal from the war in Libya, it belongs, by definition, only to me: It’s my experience. [Like the film on Bosnia, it’s] the recording of what I saw and did, and it’s therefore — how do I say it? — something that I added to the knowledge we already had. When one does this, one has the feeling to have done something good, to have directed a film not completely un-useful.

When you started making films, were there other documentaries or films you went to for inspiration?

I began with “Bosna!”, my film about the siege of Sarajevo. And yes, I had models in my head. In any case, one — that of the Spanish Civil War and, in Spain, of “L’espoir” by André Malraux. There are entire scenes of “Bosna!” which were directly — not to say it naively — inspired by his.

My great chance is that I have a team who shares my vision. My old friend Gilles Hertzog, always on the ground with me. My producer, Francois Margolin, who also never misses an opportunity to be at my side. And Camille Lotteau, Olivier Jacquin and Ala Tayyeb, who are much younger but who read the same books, nourished the same dreams, and have the same reflexes.

You show very gruesome images at times. There is footage from massacres in “Bosna!” along with executions in “The Oath of Toburk,” and children in hospitals in “The Battle of Mosul.” In “Peshmerga” you show iPhone footage of IS activities and say, “We do not look at this in the West.” Where do you draw the line in what to show?

The “free” image. The [image that’s horrible] but not useful for anything — that which we don’t learn from. That’s it, the red line. That’s what should be absolutely forbidden. 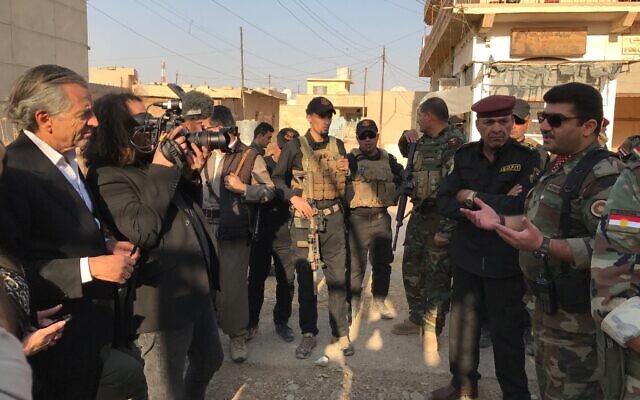 In “Peshmerga” for example, the death of the young general with white hair. We feel that he is going to die. We know it. We see him send, behind his little wall, his last battle against IS. We saw, several scenes and weeks earlier, the moment where I leave him and where I feel that he is going to die. But the filming stops a split second before the bullet hits him on the front, for this image would not have added emotion, nor to the scandal of his death, nor to the showing of his bravery.

This image would have been an easy image, [and] therefore, an obscene image. It would have been like in “Kapo,” the film by Gillo Pontecorvo, of Emmanuelle Riva filmed in slow motion at the moment where she reaches the barbed wire and dies. The whole French New Wave was constructed on the [rejection] of this scene. I am loyal to this refusal.

There were been many changes in film production and editing technologies since “Bosna!” in 1994 to “The Oath of Tobruk” in 2012. What was the most noticeable change for you? And is there anything you miss from “the old way”?

The most notable change is the editing. The montage. And it’s a fact that modern technology allows one to edit as one writes. Drafts… outlines… crossing-out… new remorse. Treatment of images as… the treatment of text. Yes, truly, it’s the same thing. The images have become like words. And the words like images. For a writer, what a joy.

I read an interview with you

Oh no! It’s not a job! It’s a duty! And that’s quite another story! When I start a film, I consider it to be an absolute, imperative, categorical duty. I feel that I have no choice, and that any other activity has to come after this one. In a sense, it’s even more than a job. It’s a much bigger constraint. 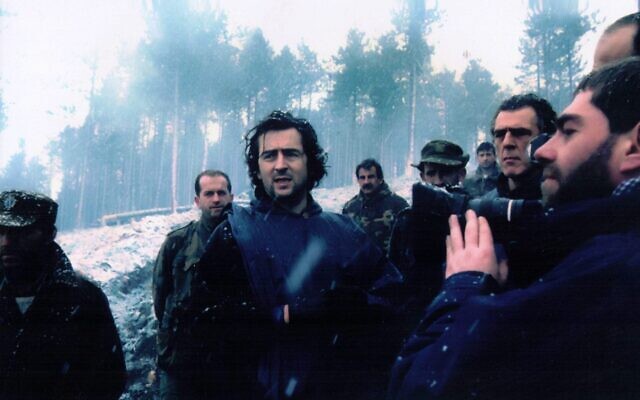 Are you done filming at battlefronts? Surely your children and loved ones try to dissuade you from going? Have they ever demanded you cease putting your life in danger?

That my loved ones worry, it goes without saying. But they are used to it now.

The only interest in this type of filmmaking is to go where it is really difficult to go. Therefore, yes, the front lines. Yes, the battle fields. That poses problems, you are right. And that my loved ones worry, it goes without saying. But they are used to it now. And I have taken the habit — me, in any case with my children — to disappear without always telling them where I am going. I tell them after, when all is finished. When the images are in the box and there is no danger anymore. They are less and less fooled. But I try.

“Peshmerga” and “Battle of Mosul” are extremely topical right now. What comment do you have about the recent Turkish action against the Kurds and, more specifically, US President Donald Trump’s tacit blessing of this action?

The two are linked. Erdogan would not have taken the risk to do what he did if he had not known, in advance, that he had the consent of Trump. The green light came from the United States. This is the most sad, the most scandalous and the most incomprehensible part in this story. Always, in a war, one has blood on his hands. But, normally, it’s the blood of his enemy. But here, it’s the blood of his ally.

While we are on the topic of Trump, how shocked are you by his recent strike against Soleimani in Iran?

I despise the idea that one can decide, coldly, from his office, to target a man, to send a drone and to kill him. And I think that the first rule of the art of the war is the proportionality. One cannot, as Sun Tzu and Clausewitz said, go, like that, in one stroke to the extremes. That being said, let’s not be naïve. Soleimani had much blood on his hands. He was one of the architects of Iranian imperialism and terrorism. And it’s Iran, and not the opposite, who declared war on the United States.

Always, in a war, one has blood on his hands. But, normally, it’s the blood of his enemy

How worried are you by the verdict in the Sarah Halimi case? Do you consider this a turning point?

It’s a step further in the banalization of anti-Semitism in France. The culture of the excuse pushed to the supreme degree. The anti-Semitic crime considered as a little affair. It’s terrible. 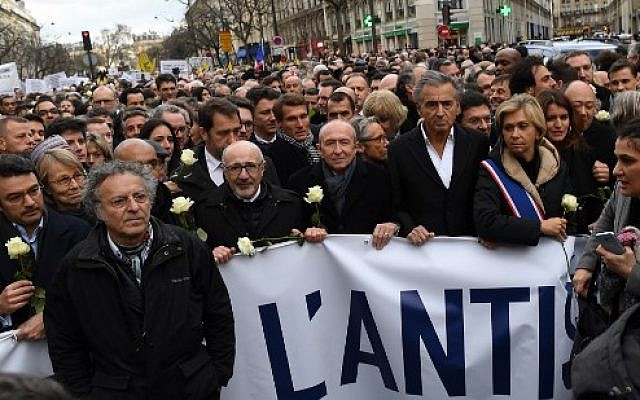 A few days ago there was a big march against anti-Semitism in New York. Marches are common in Europe, but it takes a lot

It will get worse, yes. All the ingredients of the new anti-Semitism are like a bad virus that is boiling, also in the United States. You know the ingredients. It’s Holocaust denial. The competition of memories and rivalry of victimhood. And, of course, anti-Zionism.

All of this is extremely present in the United States. It is even one of the places in the world where this is fermenting with the most virulence. And add to that the bad phantoms that woke up with the Trump campaign and with his erratic practices of power. Add to that this “moral equivalency” that he practices — I am speaking of Trump — with such cynicism. You have there all the ingredients of a flame of American anti-Semitism.

To what extent do you think Jeremy Corbyn’s loss — and the airing of anti-Semitism in the British Labour Party — may ultimately have a positive effect, in that its existence is now impossible to ignore?

The Chief Rabbi of London said it all. And I think that many Labour politicians understood that the anti-Semitic demagogy was not only abject, but it was suicidal. That’s good.