BRUSSELS — The year 2019 is a crucial one for democracy in Europe, with 14 elections, probably the most important of which will be in late May for the European Parliament.

With turnout traditionally low in those elections, there is anxiety that the passionate anti-Europeans will vote while many others will stay home, helping the far right and the so-called populist parties, which are nearly universally nationalist.

So a form of fighting back has begun, led, in a very European way, by some of its most prominent writers and intellectuals.

Thirty of them signed a pro-European manifesto, published on Friday in Libération, the French daily, that warns that “Europe is in peril” from “the populist forces washing over the continent.”

Without “a new spirit of resistance,” the manifesto warns, these European elections “promise to be the most calamitous we have ever known — victory for the wreckers, disgrace for those who still believe in the legacy of Erasmus, Dante, Goethe and Comenius; disdain for intelligence and culture; explosions of xenophobia and anti-Semitism; a disaster.” 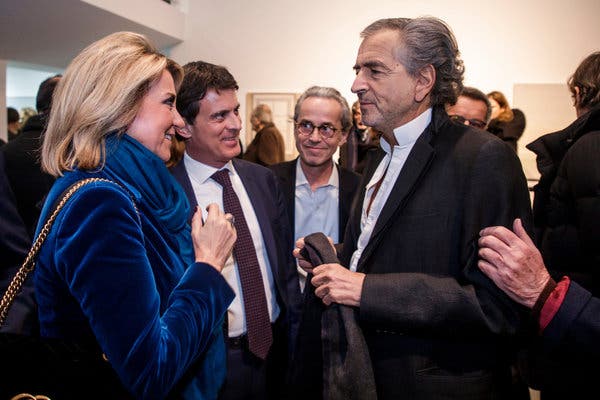 Bernard-Henri Lévy, right, conceived and wrote a letter signed by 30 writers and intellectuals that exhorts Europeans to rise to the defense of liberal democracy.CreditChristophe Petit Tesson/EPA, via Shutterstock

The writers call themselves “European patriots” who want to engage in “a new battle for civilization” three-quarters of a century after the defeat of fascism and 30 years after the fall of the Berlin Wall.

Among the signatories are five Nobel laureates and distinguished writers from all over the continent, including Milan Kundera, a Czech living in France; Svetlana Alexievich of Belarus; Elfriede Jelinek of Austria; Gyorgy Konrad and Agnes Heller of Hungary; Adam Michnik of Poland; Ian McEwan, Salman Rushdie and Simon Schama of Britain; Orhan Pamuk of Turkey; Colm Toibin of Ireland; Mario Vargas Llosa, living in Spain; António Lobo Antunes of Portugal; Peter Schneider of Germany; and Claudio Magris and Roberto Saviano of Italy.

The letter was conceived and written by the French writer and intellectual Bernard-Henri Lévy, and it exhorts Europeans to rise to the defense of liberal democracy and the European project, which “despite its mistakes, its lapses and sometimes, its cowardice, remains the second home of every free man and woman on the planet.”

In an interview, Mr. Lévy called populism “a smoke screen for neo-fascism” and said that the signatories were “united by love of Europe and a sense of emergency — the 30 are afraid.”

Taken together, he said, the writers “embody the soul of Europe” and wanted to make “this appeal to action on the eve of an election that we refuse to abandon to the gravediggers.”

Mr. Lévy himself is preparing a tour of European cities from March until the elections in late May to encourage those who share his views to turn out to vote.

« It’s not too late for Trump to rethink a dangerous betrayal of U.S. allies in Syria (Washington Post, January 2019)
“Real Time” with Bill Maher and Bernard-Henri Lévy about his book “The Empire and the Five Kings” (HBO) »

Eyeless in Gaza, by Bernard-Henri Lévy

The Metaphysics of the Sarah Halimi Affair, by Bernard-Henri Lévy (Tablet)