Described here are eight trips to Afghanistan made by a French writer over a period of 40 years, the country and its unceasing tragedy ever in his heart.

1981 — Bernard-Henri Lévy, Marek Halter, and Renzo Rossellini travel from Peshawar with radio transmitters for Commander Massoud’s Afghan resistance, the goal being to break the isolation of the Mujahideen fighting the Red Army and enable them to communicate from valley to valley. The operation was the origin of Radio Free Kabul.

October 1992: During a humanitarian mission undertaken on behalf of Action Against Hunger, an NGO that Lévy founded in 1979, the writer meets again with Ahmed Shah Massoud, this time in Kabul.

1998 — For the French daily Le Monde and several other international newspapers, Bernard-Henri Lévy travels with Massoud by helicopter from Dushanbe to the Panjshir Valley. He profiles the Lion of Panjshir, noting his three-year resistance against the Taliban and declaring that “when you fight for your freedom, you are also fighting for ours.” On this occasion Massoud speaks of a certain Osama bin Laden and provides details of his whereabouts.

2001 — Invited to Paris by BHL, Massoud is denied (on the advice of the foreign ministry) an opportunity to share with President Jacques Chirac details of the extreme isolation of the Afghan resistance. By contrast, Massoud is received in Strasbourg by Nicole Fontaine, General Philippe Morillon, and the European Parliament.

December 2001–March 2002 — To make up for his refusal to receive Massoud in Paris, President Chirac asks BHL to spend several months in Afghanistan preparing a report on France’s potential contribution to the reconstruction of Afghanistan. The report is published in France by the national printing office. Twenty years later it reappears in the United States with a laudatory preface by General David Petraeus, commander of U.S. forces in Iraq during the surge.

2004 — Founding of Les Nouvelles de Kaboul, a Franco-Afghan monthly published in Dari and French, to encourage the free circulation of ideas and dreams among Afghan youth and to open the country to the world.

August 2008 — Trip to Kabul with French defense minister to honor 10 French soldiers killed in an ambush in Uzbin. Lévy publishes an account of the trip in Le Point.

Autumn 2020 — Bernard-Henri Lévy travels to Panjshir to meet Ahmad Massoud, the son of Commander Massoud, on his home ground.

March 2021 — BHL, the mayor of Paris, former Afghan president Hamid Karzai, and then vice-president Abdullah Abdullah inaugurate a lane named for Commander Massoud at the bottom of the Champs Élysées in Paris.

In short, a 40-year commitment. The abandonment of Afghanistan to the Taliban is considered a wound and a stain by countless humanitarians, academics, archaeologists, soldiers, diplomats, and ordinary citizens, as it is for all lovers of liberty. But the fight goes on. 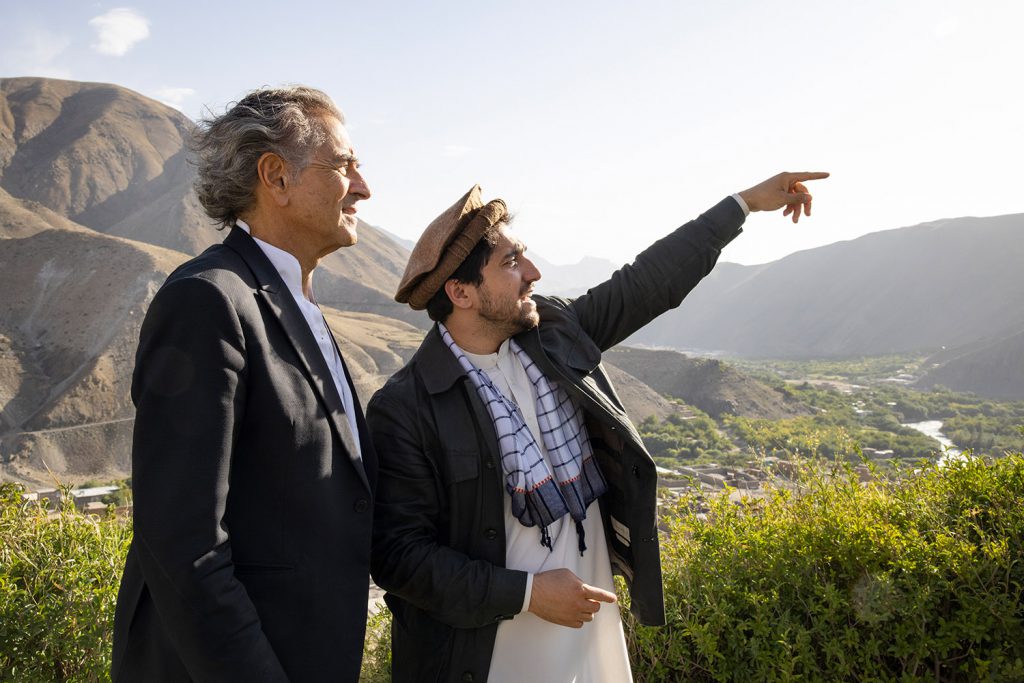 The Afghanistan of Ahmad Massoud

In 2020, BHL returned to Afghanistan to learn more about the resistance being led by the son of the Lion of Panjshir.