1991: It is the end of the first Gulf war. Tens of thousands of Kurdish refugees have fled the regime of Saddam Hussein. A no-fly-zone has been established by the United States, Great Britain, and France to protect them from chemical attacks like the one that occurred in Halabja in 1988. Bernard-Henri Lévy crosses into Iraqi Kurdistan from Cukurca, Turkey, during Operation Provide Comfort. When, Lévy asks as he embeds with the Kurds, will we see an Operation Provide Democracy?

2003: With the fall of Saddam Hussein, Iraqi Kurdistan gains its autonomy. Lévy opposes the war in Iraq. He deems it “morally defensible” but a major “political mistake.”

October 2014: The Islamic Caliphate has seized Mosul and northern Iraq. Bernard-Henri Lévy issues a “last appeal for Kobane,” which stands close to the Turkish border, though Turkey takes no action. Together, Syrian and Iraqi Kurds save the city, the first of their joint victories over the Islamic State.

February 2015: In Iraqi Kurdistan, BHL meets with Peshmerga soldiers who have just repelled the ISIS offensive against Erbil, the capital of the autonomous region. Upon his return to France, he organizes a meeting between a Peshmerga delegation and French president François Hollande.

July–December 2015: The filming of Peshmerga proceeds along the thousand-kilometer front line held by Kurdish fighters from Kirkuk to the Sinjar mountains, where, in 2014, thousands of defenseless Yazidis fleeing ISIS were slaughtered. The crew embeds in the sectors of the front held by the Kurdish generals Sirwan Barzani, Magdid Harki (who will die in the fighting that rages as the film is made), Kamal Kirkouki, and Hussein Yazdanpana. The film receives a standing ovation at the 2016 Cannes Festival.

October 2016–January 2017: The Battle of Mosul is filmed among the Kurds of Colonel Schwann and the Iraqi Golden Division. It includes the battle of Bashiqa in the plain of Nineveh, the refuge of Christians pursued by the Islamic State. The filming lasts until the liberation of the western half of Mosul.

September 2017: Bernard-Henri Lévy serves as an official observer of the referendum on independence organized by the Kurds in Iraq. The results of the referendum are squelched by a new gang of four—Syria, Iraq, Iran, and Turkey—who embargo the Kurds. The West abandons the Iraqi Kurds, who had been its advance guard against ISIS, losing thousands of Peshmerga soldiers in the process.

November 2017: Peshmerga is screened at the United Nations headquarters in New York. 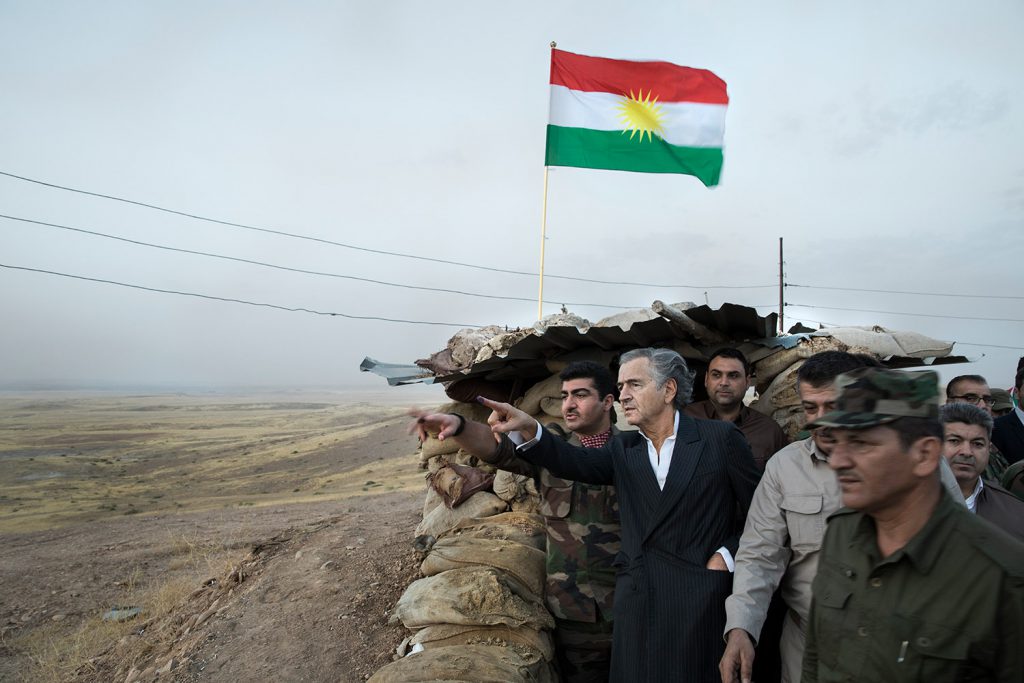 Kurdistan: “I will be with the Kurds till the end of my life”

BHL is one of the most loyal supporters of the Kurds, about whom he has made three documentary films.

Witnessing the struggle of another branch of the martyred Kurdish people.