An European in Ukraine

Winter 2014. Kiev, dreaming of finding a home in Europe, rises up against Putin’s puppet, Viktor Yanukovych. The sinister alliance between Putin and Yanukovych puts Ukraine in danger and Europe at a crossroads.

On February 9, 2014, Bernard-Henri Lévy delivers a speech on the thronged central square known as the Maidan, occupied around the clock by the people of Kiev. It is, he says, “an exceptional day in history, such as only a great people can create,” with the great Ukrainian people coming together around their European dream. Lévy pronounces himself a Ukrainian at heart and calls the crowds in the Maidan his “fellow Europeans,” sisters and brothers who are taking “extraordinary risks, even the highest, to gain the right to enter our common house.”

Ukraine’s autocratic leader fires on the Maidan demonstrators in March, killing a hundred. But the people do not back down. Yanukovych flees to Russia. Bernard-Henri Lévy speaks again to the victorious Maidan: “The virtues of resistance that are the spirit of Europe […] you embodied them during the bloody days; and the national socialism, antisemitism, and fascism that have been the shame of our continent were found on the side of your enemies.”

In response to the victory in the Maidan, Putin annexes Crimea. BHL has this to say: “A man who sets the example of violating Europe’s borders has no place in forums where the international community works toward global stability.”

In September 2014, the Russian army invades the Ukrainian territories of Donetsk and Donbass in support of separatists in eastern Ukraine. It is “the first true war in Europe in decades, the first aggression by one sovereign state against another, which the first intends to dismember and relegate to vassal status.”

BHL stages and performs in his play Hotel Europe in Odessa, Lvov, and Kiev to honor the pro-European stance of the new Ukraine. He invites President Poroshenko to the commemoration of the seventieth anniversary of the D-Day landing, where Putin also appears. President Poroshenko describes BHL, in a communiqué dated August 6, 2015, following another meeting, as the “inventor of the Normandy Format.”

Bernard-Henri Lévy returns to Ukraine in September 2016 to deliver—in the name of France and its president, François Hollande—an address in memory of the Jews killed by Nazi Germany in Babi Yar during the bloodiest episode of the Ukrainian “Holocaust by bullets.” This commemorative act is another step in the integration of Ukraine into Europe’s collective memory.

In 2020, reporting from the trenches of Donbass, Lévy covers all 450 kilometers of the front line across which the defenders of democracy and of Europe face off against pro-Russian separatists. In the trenches around Novotroitske, he shares his “impression of a Verdun suspended in time, frozen, and terribly archaic” before returning to the ghostly cities and the no man’s land made lethal by snipers in Putin’s pay. These are part of a “landscape from the end of the world” that he later describes in these terms: “Nothing terrified me more than this gutted, lifeless landscape that we shared with shadows pale and numb.”

The committed European in Lévy tirelessly denounces the Kremlin’s act of taking the Ukrainian people hostage and Europe’s timid failure to bring its youngest sibling, exposed at the far reaches of the free world, fully into the fold. 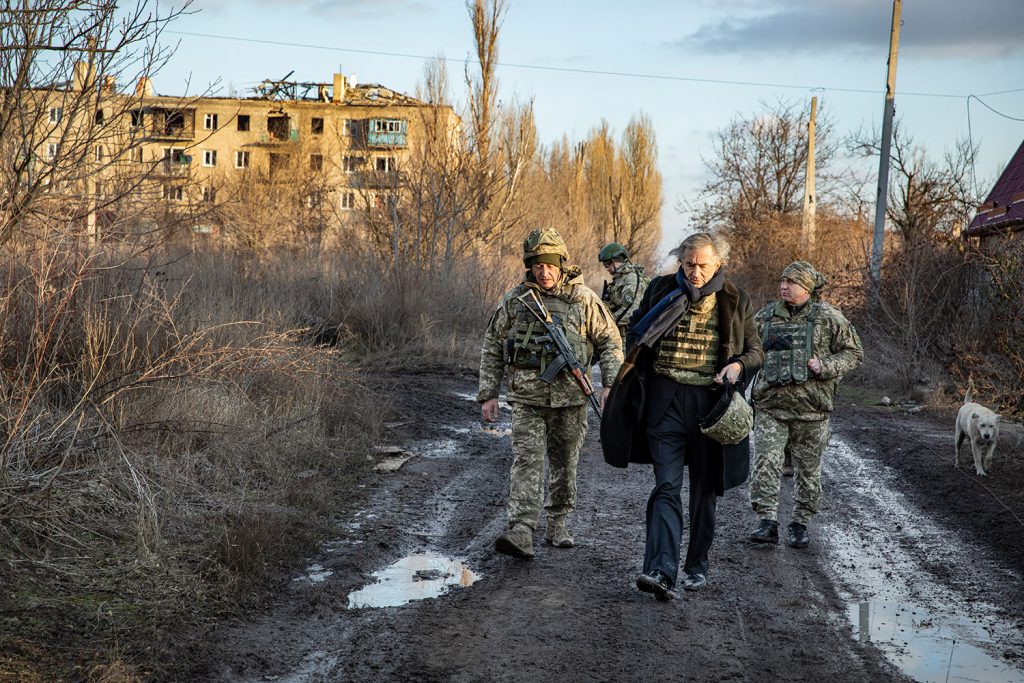 On the front line separating Ukraine from the separatists supported by Putin’s Russia.