The French intellectual at home in Paris, where he authored much of “The Genius of Judaism,” his new book about what it means to be a Jew today.

I travel a lot, so by definition I write in many places: cabs, cafes, nearly everywhere. But when I’m in Paris, I work from home. Most of my recent books have been written here, including a large part of the latest one. I continue to write by hand, as I did 20 years ago. For me, there’s a physical dimension of writing that’s too important; I couldn’t write directly on the computer. When I’m working on a book, I write at all times of day, hardly stopping, with just a few hours to sleep. Occasionally, I’ll need to stretch my legs and will tape pieces of paper on the bookshelves and on the window, moving between them and writing a word or phrase on each that I’ll later collect into sentences. Here, I really am cut off from the rest of the world — there’s no phone, no internet, a landline that very few know the number for. It’s a good place to put my body and soul completely into the writing. The process is like heat — I bet my body temperature increases. 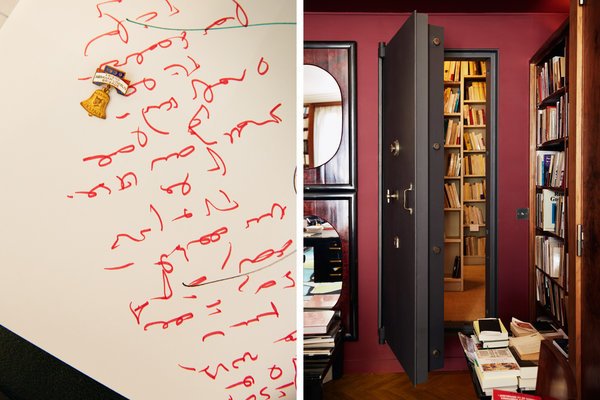 What you see here is only a small part of my library. I have books scattered around my apartment that I’ve arranged in alphabetical order not only by author but by subject, too, the reasoning being that you sometimes have an author who only wrote one book on a specialized subject and whose name you’ll never remember. No one else would ever find a book here, but for me it’s easy to decipher. Behind my desk is a sort of second library, about 20 square meters, devoted to the volumes I need for whatever I’m working on at the moment. It’s like a big safe for my most precious items.

Other than my books, I’m not really attached to objects, except maybe one: a medal that I was given by the president of Bosnia and Herzegovina, Alija Izetbegovic, in 1993, when I was in Sarajevo shooting a documentary on the Bosnian war. It’s the only medal I’ve ever accepted from a state government, including my own, probably because it’s given to so few people. And because I thought I really deserved it.

Légende Photo 2 : Lévy still writes by hand. At right, a vault-like door behind his desk that leads to a special library.

« Clearly, the Trump administration has a problem with Jews (CNN, the 23th of February 2017)
Bernard-Henri Lévy Premieres ‘Battle of Mosul’ Documentary in Iraq (By Vladislav Davidzon, Tablet Mag, the 9th of March) »

The Afghan Resistance has begun (UnHerd)

Why the US should stay in Iraq (Sirwan Barzani on CNN)